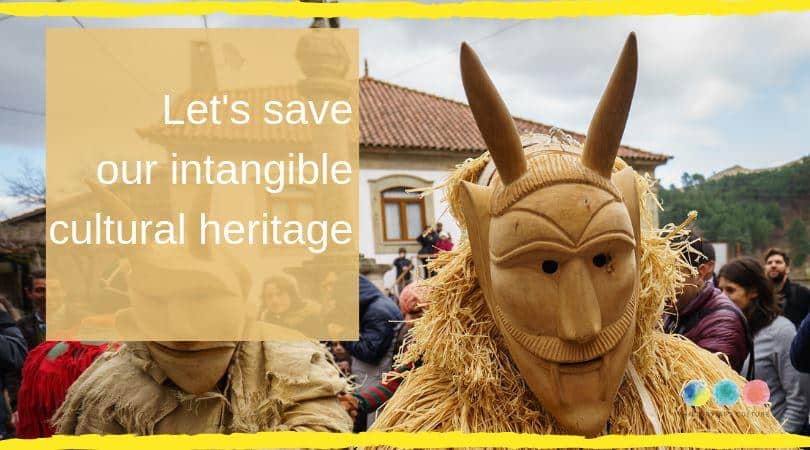 This article aims to present the inventory tools of preservation of intangible cultural heritage made available by the Portuguese organization of Cultural Heritage (DGPC).

We believe that all initiatives and tools aimed to the safeguarding of the intangible cultural heritage are of great importance. whether they are initiative of or of national institutions or local, NGO or private centers.

Cover image - Feast of the Boys, Lazarim, Trás-os-Montes, Portugal. The Boys' Feast takes place in several villages in the north of Portugal between December 24 and January 6.Starred by the single boys from the village and associated with the cult of St. Stephen. It integrates several events. Highlight for the loas, in which the boys refer events of the year in the village, usually with character of social criticism. Learn more. The inventory of intangible cultural heritage is one of the most important steps to safeguard it.

In this sense the DGPC has been developing an intangible cultural heritage inventory project integrating digital tools. The immaterial heritage collection kit "can be used either in the school context, particularly in the 2nd and 3rd cycles of schooling, or in educational and training activities promoted by other entities, namely the Museums, through their Educational Services. "

Get to know the project

"The intangible cultural heritage Kit was conceived as an instrument to promote the valorization of the ICH by young people, as well as to promote their initiative and / or participation in actions to safeguard the heritage of their community.

In addition to the Sheets for registration of manifestations of ICH (Traditional Knowledge and Crafts, Festive Traditions, Oral Traditions ), the Kit also includes tools for registration of material assets. The aim is to sensitize young people to the integrated approach of Intangible Heritage and Material Heritage as advocated by UNESCO and as underlined by national legislation for the  sector.

The Kit is also intended to be used as an instrument for the promotion of intercultural dialogue, in particular in a school or museological context. The Kit sensitizes young people to the fact that, as expressed in national legislation, intangible heritage is considered not only the long-established traditions of Portuguese popular culture, but also the traditions of communities of non-Portuguese origin based in Portugal, which constitute an important factor of their identity.

The Kit was conceived mainly for application at the local level, promoting the interaction of young people with the elements of the community (village, parish, neighborhood, etc.), and promoting in-depth knowledge and appreciation of their Intangible Heritage.

Get to know one of the most important tools for collecting intangible heritage - the oral history interview. View more.

a. The process of recording memories

b. Is everything we collect Oral History?

a. Choosing a project

b. Research and mapping the field of action

b. Which equipment to use

c. How to process the information

4 – The Process of Archiving and making the records available

how to analyze a painting | see a practical example