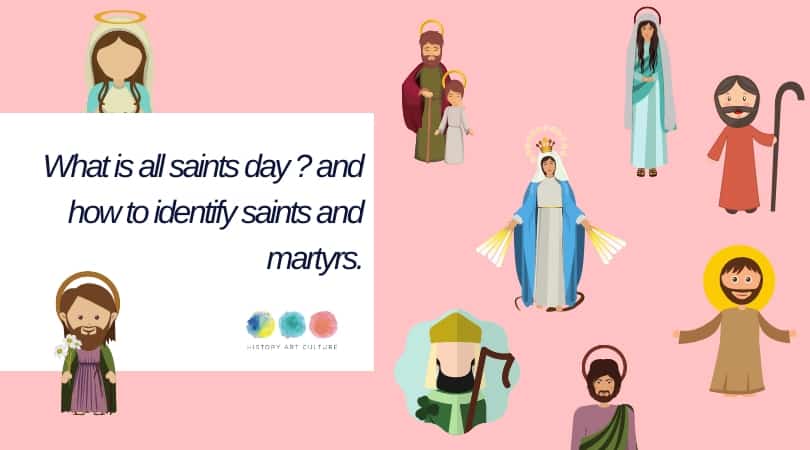 November 1th is all saints day and holiday in some countries. But what is the origin of this celebration? And what are saints and martyrs and how can we identify them?

the all saints day

“The Catholic Encyclopedia defines all saints day as a feast in“ honor to all saints, known and unknown. ”By the end of the second century, professing Christians began to honor those who had been martyred for their faith and, certain that they were already with Christ in heaven, prayed to them to intercede on their behalf.The regular commemoration began when, on May 13, 609 or 610, Pope Boniface IV dedicated the Pantheon (the Roman temple in honor of all the gods) to Mary and all the martyrs."  In: wikipedia

"It was 835 AD. The process of Christianization - conversion to the Christian creed - continued through the proliferation of the teachings laid down in the Bible. That is why Pope Gregory IV chose November 1 to commemorate all those who died with" a life fully realized, which are examples of life and are in the glory of God. ” In: Observador

It can be said that the all saints day was born then at a time when the number of saints and martyrs increased. It was therefore necessary to create a day in which they were all celebrated since it was already the custom of the Catholic Church to dedicate one day of the year to devotion to each saint.

How was devotion to the saints?

The all saints day did not eliminate the devotion to each individual saint. But how were they identified?

Religious images were the basis for devotion to saints and martyrs. And codes and symbols were created that allowed the identification of holy figures.

In the following text by Yolanda Silva we can see which elements allowed believers to identify their devout saints.

And, of course, they enable historians, art historians, museologists, tour guides, and anyone interested in the subject today to perceive and identify the representations of saints and martyrs over time.

Want to learn how to identify symbols and attributes of saints in art?

Online Course Iconography of the Saints

Learn more about this course

Saints and Martyrs: How were they identified?

The use of attributes (associated objects or symbols), as we spoke earlier, came alongside a need to identify the religious characters before a mostly illiterate audience.

How can we distinguish the holy figures?

In most cases, the physical aspect is more or less standardized and has very few variations:

- the facial features tend to be balanced, silhouettes are slender and with a somewhat fragile appearance, as a way to suggest the life of asceticism (with few exceptions, such as St. Christopher, represented as a more athletic man);

- most of the images presented are healthy, but many representations show the Saints with some sort of the mutilation (usually resulting from their martyrdom or disease) or even suffering their martyrdom;

- saints are represented mature in age, except for those who died in youth or that usually are seen as elderly people (like Saint Joseph or Saint Jerome);

- European physical types are the most predominant, in particular the Mediterranean;

- beards are short on the young and long on patriarchal characters (note that there is one female saint who is represented with a beard: St. Wilgeforte, the only exception to the softness that usually characterizes women's faces);

- it is rare to find female saints depicted with visible hair (one example of a female saint with exposed hair is St. Mary Magdalene);

- it is also rare to find physical inferiorities and defacements (as exceptions to the rule we find St. Rocco with the ulcers of leprosy and St. Noemia’s deformed foot, represented like a goose foot).

The clothing reveals more about the identity of the image, helping us define certain aspects of life- experience, status and country of origin of the Saint in question, as well as the hierarchical position that he/she occupies in the Church, if any.

We can outline some general aspects:

- saints of the early centuries of Christianity are dressed in a conventional way, with a white tunic, mantle and girded sandals;

- the Apostles are dressed in the same fashion, but barefoot (according to religious reasons, inferred in the New Testament);

- a Saint who had military activity is represented with their weapons and armours (which sometimes leads to anachronisms in the representations);

- Angels and Archangels of the celestial militia may be represented with weapons and armours, although, they are generally seen with white robes;

- clothing reflects the social status: a peasant (for example, San Isidro), a shepherd (St. Vendelin) or a King (St. Louis of France);

On this day of all saints you can still get to know some of the main saints and their attributes in the section dedicated to iconography on our blog.

146
25,00€
JOIN US IN THIS ADVENTURE FOR THE WORLD OF HISTORY | ART | CULTURE. Subscribe newsletter

what is visual literacy in art ?