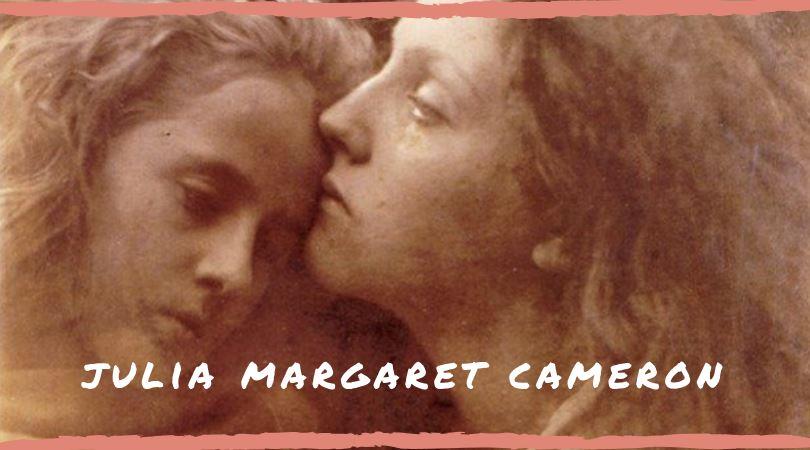 In the nineteenth century when  the photography was still in the beginning, Julia Margaret Cameron unexpectedly emerges. At age of 48 she discovered this way of image registration, falling in love with it obsessively, becoming a landmark in the history of photography. Her determined personality and entrepreneurial spirit put her among the best photographers of her time, leaving us a brilliant and unique photographic collection.

Get to know more posts about history of photography in our blog.

She (1815-1879) was born in Calcutta, India. Although educated in France until the age of 19, she returned to India in 1838, where she married Charles Hay Cameron, a lawyer and tea planter, a man 20 years older. In 1848 the couple and their children moved to England, integrating  into the intellectual and artistic life of London.

How did Julia Margaret Cameron get started as a photographer

When she was 48 years old, Julia Margaret Cameron's daughter gave her a camera. She did not know, at the time, that this gift would change her life forever. She began to devote in body and soul to photography. With the help of her friend and mentor, Sir John William Herschel, she quickly acquired the domain of the wet collodion process, thus beginning her photographic career. She transformed a hen house into an improvised laboratory and into studios a few dependencies of her house.

Get to know what is the wet collodion process and how to preserve antique photos in the online course Preventive Conservation of Photography.

Cameron quickly began developing a distinctive, original and unusual photographic style for the photography at the time.

Julia Margaret Cameron photos are characterized by long exposure times, the lack of sharpness caused by a slight blur, the suppression of details, the stains caused by the irregular way of applying the wet collodion and by the use of symbolism in the lighting. All these elements have contributed to increase the emotional load of her images.

Julia Margaret Cameron artworks can be considered divided into two categories: close-up portraits and allegorical scenes based on religious and literary works (mythical and legendary).

Cursor over the images to view subtitles.

With a privileged position in society and a close connection with the world of art and literature, Cameron had the opportunity to photograph influential people of the time, such as Sir John William Herschel, Alfred Lord Tennyson, Charles Darwin, John Everett Millias and William Michael Rossetti.

Julia Margaret Cameron portraits are mostly photographed closely including only the face of the pictured, sometimes with a distant look suggesting a need for privacy. The one portrayed at the same time seemed noble, virtuous, and thoughtful.

The lighting was phenomenal, the soft light illuminating the profile of the face subtly, gently accentuating the facial features. Cameron, by photographing Victorian celebrities, her friends, family, children, neighbors, and employees, led them to a psychological introspection in order to capture the essence of their souls and their personalities.

The women were photographed by Cameron in an intimate and personal way, highlighting the ideals of the role of woman as mother and wife. However, the fact that many of her figures appear out of focus and with loose hair suggests that Cameron wanted to emancipate the woman, being a defender of her dignity and independence, thus contributing to changes in Victorian society.

In Julia Margaret Cameron images the aesthetic concern is emphasized, these were loaded with emotion, fruit of the gestures, the expressions of the portrayed and the dramatic illumination used.

The allegorical scenes represent the other half of her work.  In these we can see the pre-Raphaelite influence, in which she gave wings to her imagination and creativity, recreating theatrical scenes, arranging the people who would be photographed, as a painter would do with the characters of his paintings.

The images represented historical scenes or scenes of literary works, being made to look like oil paintings, which included a wealth of details, such as historical costumes, decoration and props.

Cameron intended to create great photographs with the subtle qualities of light and shadow that she admired in painting.

Julia Cameron made every effort to promote photography by becoming a member of the photographic societies of London and Scotland. She tried to give a new status to the photography, elevating it to the category of art, thus breaking, with the paradigm of the conventional photography.

Her style was not appreciated by some artists of the time, having suffered many criticisms, even being ridiculed. However, her enthusiasm for photography and the unconditional support of family and friends gave her the strength to continue her work, becoming one of the most prolific and advanced amateurs of her time.

"I longed to take all the beauty that came to me, and at last the desire was satisfied".

Cursor over images to read subtitles.

Her photographic career was short, covering only 11 years of her life, nevertheless she was a pioneer in the evolution of artistic photography, being her work innovative, being much ahead of her time. She died in 1879, but her work continues to be one of the most well-known portraits in the history of photography.

Each of us looks at the surrounding world in a unique and incomparable way. She is a remarkable example of this unique way of looking at the world, transposing it into her photographs.

HOY, Anne H., The Book of Photography: The History, The Technique, The Art, The Future,

Julia Margaret Cameron – an introduction in Victoria and Albert Museum

ROSENBERG, Karen, Ardent Victorian at the Lens in The New York Times, 2013.

What you'll find in an history of architecture course