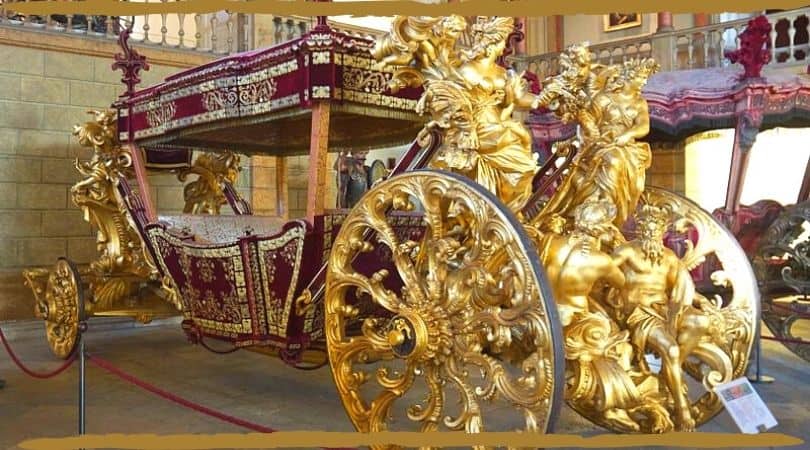 Get to know the The National Carriages Museum , in Lisbon.

Original post on the Author's Blog  Secrets of Portugal. 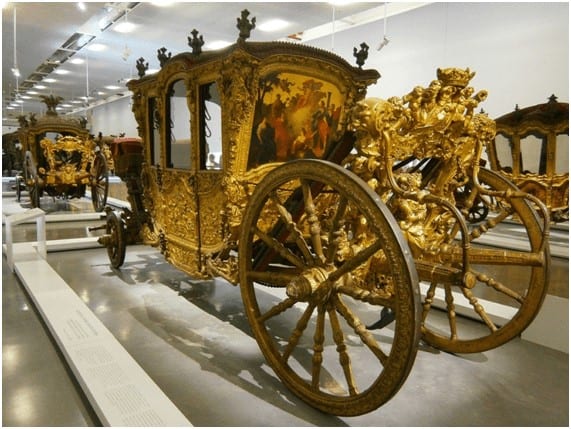 The National Carriages Museum  | the exhibition

The collection of horse-drawn vehicles, litters, berlins, sedan chairs, promenade horse carriages (also known as cabriolets) and other animal-drawn vehicles, from the 17th century to the 20th century, is simply superb!

A lot of these vehicles were used by the last Portuguese Royal family, the Bragança, as well as by the clergy or by the Portuguese upper class families. They were often used during Royal weddings, baptisms or other religious ceremonies, such as religious processions (the statue of the Holy Mary was, for example, transported in a glass shrine case), or during spring and summer promenades in their Palaces’ gardens and in their trips to the countryside. 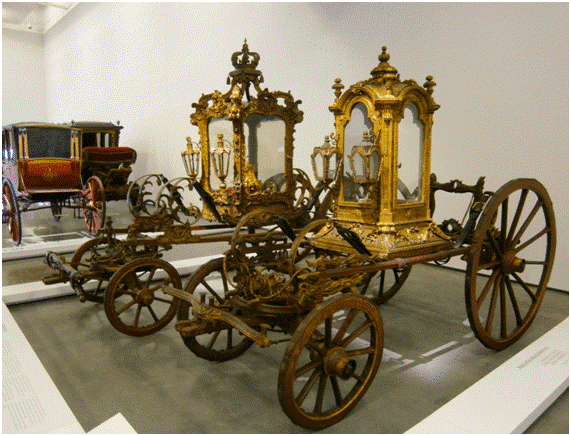 In many of the 18th century carriages you can see the side panels decorated with plant or floral motifs or gilded woodcarvings with the representation of feminine figures, barely naked young children (used as a symbol of innocence and purity) or the twelve Zodiac signs.

The information is very well displayed in many languages (including English, of course) in touch screens that show detailed images of the interior of the carriages. I know a lot of museums in Portugal and I can say that this is probably one of the most modern ones.

So, be prepared, to spend at least one hour (or more) to calmly visit this fabulous Museum!

Why Lisbon has such an excellent collection of horse carriages?

Before we continue, I would like to explain why The National Carriages Museum probably hosts one of the best European collections of horse-drawn vehicles. In my view this is due to 3 main reasons: 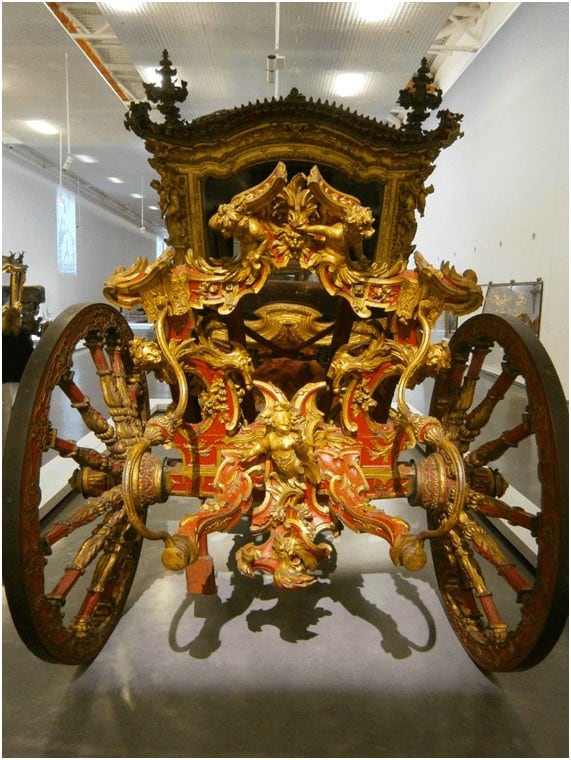 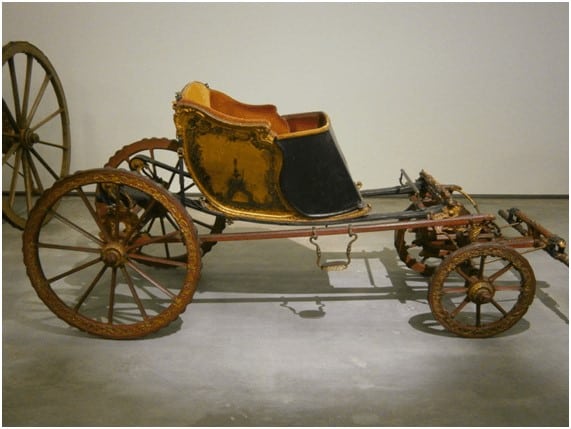 How to get to The National Carriages Museum

You can easily get there in 30 minutes by tram (the tram number 15 leaves from the Commerce Square, located in the historic centre) or by taxi (the cost of a taxi from the city centre should be around 8 euros). The Museum opens at 10 a.m. (it closes on Mondays and some holidays! Check the website www.museudoscoches.gov.pt) and the ticket costs 8 euros per person for the permanent exhibition in the new Museum. However, a combined ticket costs 10 euros per person: includes the National Carriages Museum as well as the old Museum – some horse carriages are still in the former Museum which is just next to the current one. You can by the ticket directly at the ticket office but not through the internet.

I often do many tours in Belém and I recommend that you go early in the morning. Belém is one of my favorite districts: there is a lot to see and you can literally spend the entire day visiting other very good museums and monuments such as the Maritime Museum, the Archeological Museum or the Cloister and Church of the Jerónimos Monastery, located only 10 minutes away on foot from the Museum.

The National Carriages Museum | the collection

The oldest horse carriage: the coach of Philip II 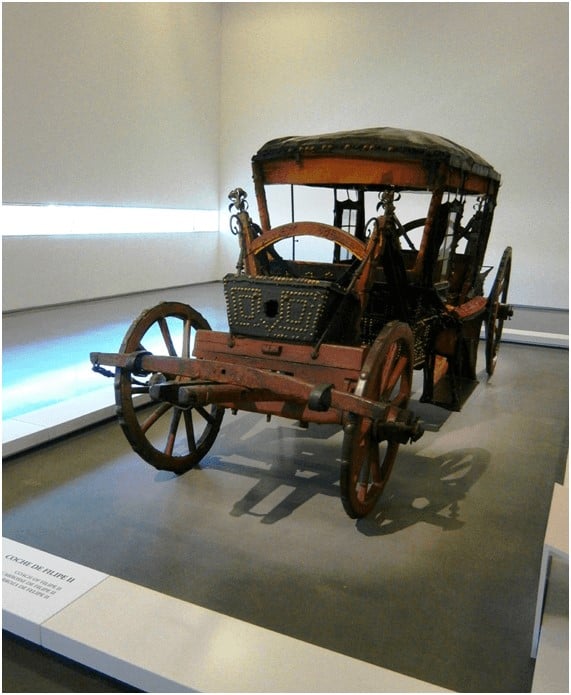 The oldest horse-drawn carriage exhibited in the Museum dates back to the 17th century: the coach of Philip II, the Habsburg Monarch that was King of Portugal and Spain (with the title of Philip III) at the same time. King Philip II of Portugal, coming from Madrid, where the court was based, arrived in Lisbon in 1619 in this coach, after a journey of more than 60 days through the old Roman roads that were still used at the time. It was pulled by 6 horses and there was no coachman: a horseman followed closely the horse carriage and controlled the other horses.

The Museum’s highlight: the horse carriages of King João V!

One of the highlights of this outstanding museum is surely the 3 horse-drawn carriages with superb gilded woodcarvings that were part of an impressive embassy that was sent to Rome, to Pope Clement XI, by order of the Portuguese King João V, in 1716. The main objective of João V – a very eccentric king who was, by the way, fascinated with the opulence of the French Palace of Versailles – was to obtain more privileges to the Portuguese Catholic Church. The embassy was led by the ambassador, D. Rodrigo Annes de Sá Almeida e Meneses, the Marquis of Fontes, whose portrait is displayed right next to the 3 horse carriages. 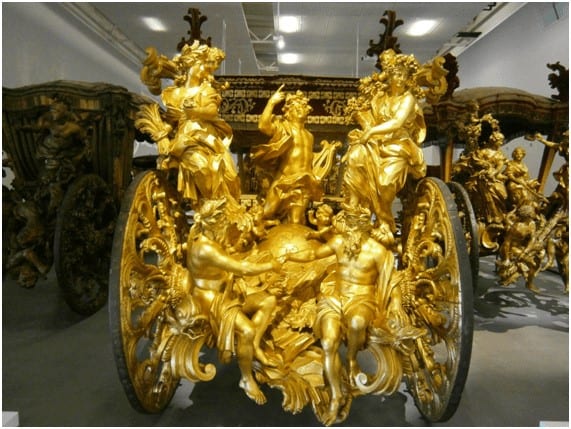 King João V reigned in Portugal between 1707 and 1750 and during this time a lot of gold, precious stones and diamonds arrived massively from Brazil, one of the country’s main colonies. Therefore, with that influx of wealth King João V was able to fund the construction of the Aqueduct of Lisbon as well as the Palace and Convent of Mafra. These 3 triumphal coaches were made in Rome, 4 years before, by Italian craftsmen in part because King João V was also fascinated by the Italian art (for example, during his reign he commissioned several other works of art to Italian sculptors). After the event, they returned to Portugal by boat and King João V was able to admire the horse-drawn carriages that were sent to Pope Clement XI. The embassy was of course composed of more than 300 horse carriages: unfortunately the majority disappeared or it is now present in other museums.

After admiring the 17th century and 18th century horse carriages that were used by our monarchs, you can also see the 19th century Phaetons, Landaus or Broughams that were used by the Portuguese rich families for transportation inside the cities or during their trips to the countryside for leisure or hunting expeditions. The decoration of these horse-drawn vehicles is more sober and less colorful and they even have a lantern (to be used during the night trips). If you look carefully you will see that the producers' trademark is engraved on the hubs of the wheels. 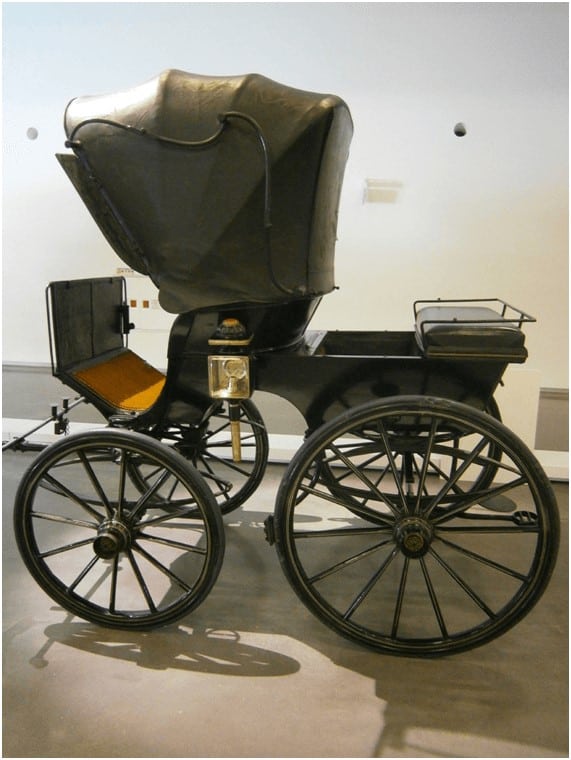 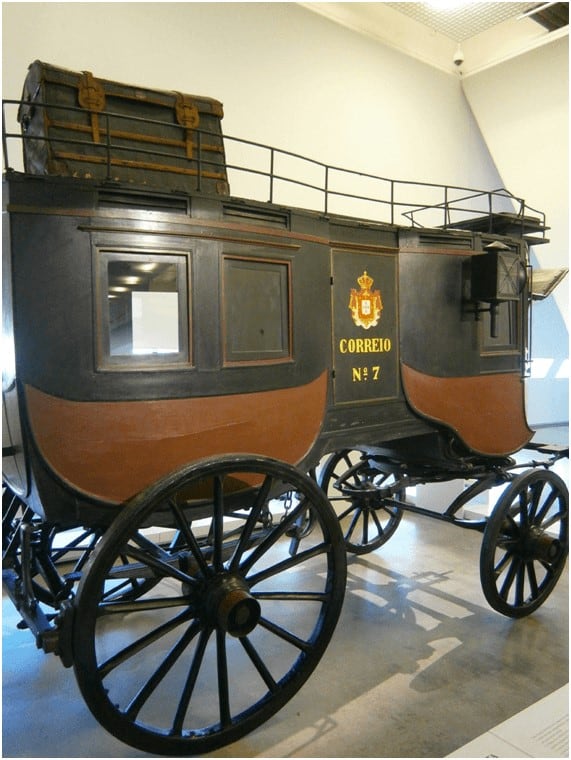 The trip lasted more than 24 hours and, along the way, there were many stopping points to change the horses and for the passengers to rest and have something to eat. In some of these road coaches the passengers' luggage was stored in the hood or there was a compartment underneath the coachman's seat that was used to store mail and baggage. 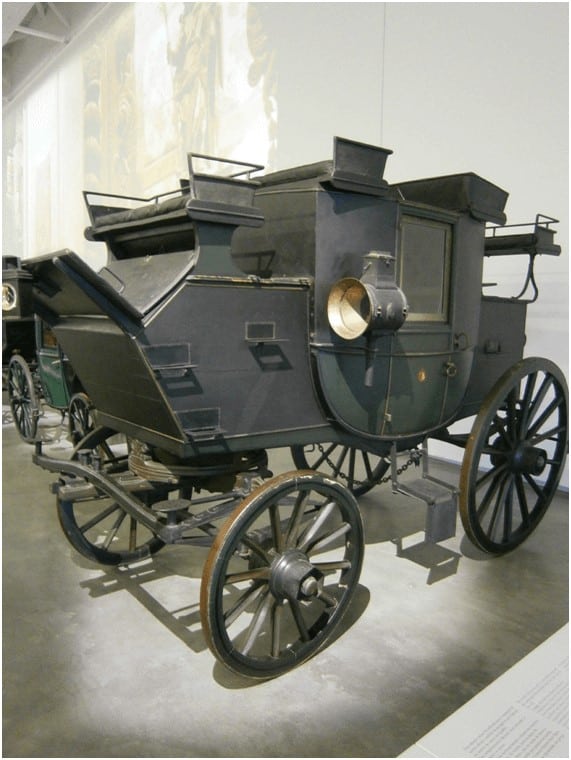 The Landau of King Carlos I

Another highlight of The National Carriages Museum is the Landau where King Carlos I and Prince Luís Filipe (the heir to the throne), were killed by 3 gunmen, on February I, 1908, when they were returning from the Ducal Palace of Vila Viçosa. This assassination was probably part of a conspiracy led by the Republican Party and by the Carbonária (a sort of terrorist organization). Currently, we can still see the traces of the bullets on the left side of the horse carriage. Two years after, in 1910, there was a Republican revolution, on October 5, that abolished the monarchical regime and implemented the First Republic in Portugal.

Besides the collection of horse-drawn vehicles do not forget to admire the trumpets, the royal banners and war drums, the cavalry accessories, the uniforms, the whips and the boots of the head coachmen, archers and grooms and also do not miss the collection of Royal portraits that is exhibited in the Museum’s second floor.

Finally this top class Museum has also something quite unique: the first automobile that circulated in the Lisbon’s streets, in 1895! It is amazing! The vehicle belonged to the Count of Avilez, Jorge Avilez de Sousa Feio, and was produced in France by the Panhard & Levassor Company!

What a great way to end the tour in a fabulous Museum! 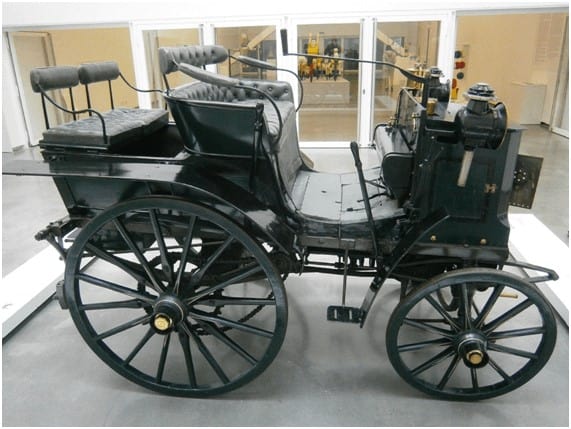 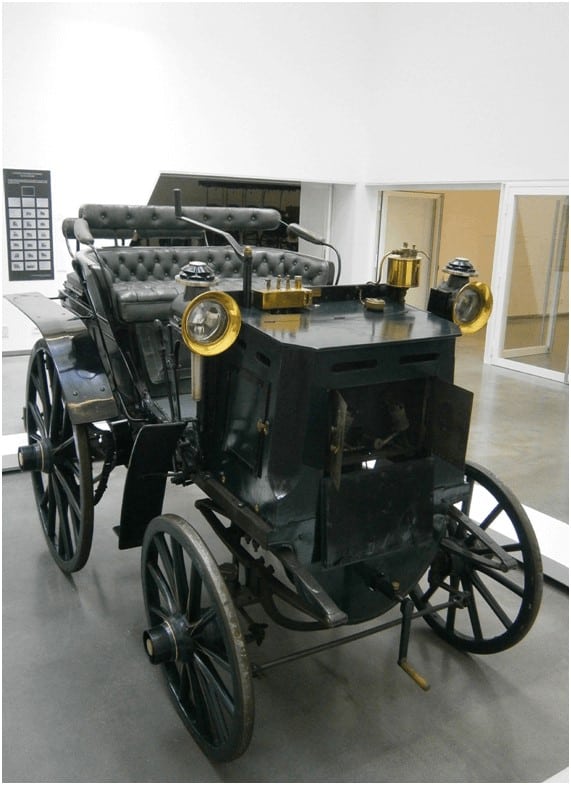 Nuno Alegria - Degree in History from the University of Lisbon, postgraduate degree in Contemporary History from the University of Coimbra and in Tour Guiding from the Instituto de Novas Profissões (INP). Official tourist guide, fluent in English, French and Spanish, works for various travel agencies guiding tourist groups in museums and monuments all over Portugal. Project manager at Secrets of Portugal (www.secrets-of-portugal.com ), a company that organizes art and history walking tours in Lisbon and Sintra.

another article by Nuno Alegria - Amadeo de Souza Cardoso – the life and the work of a fabulous painter!
Do you want to receive updated information on themes of History, Art, Culture and Historical Heritage? - Subscribe newsletter

Museums and the world - how to deal with the pandemic