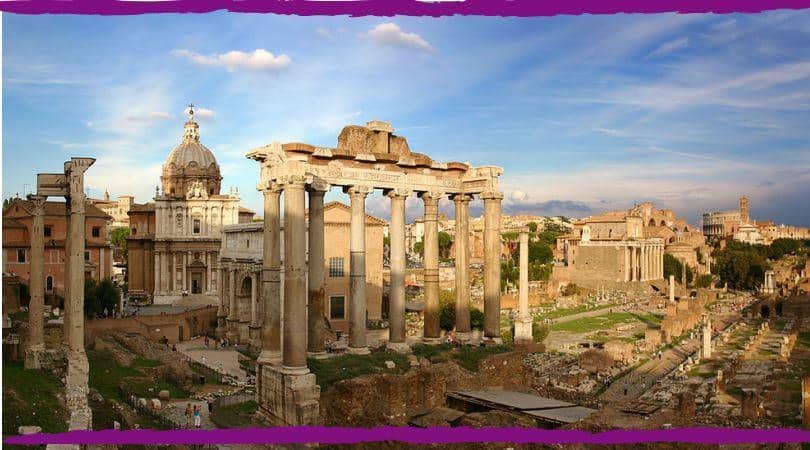 Let's look at the roman architecture that fascinates by the great and monumental constructions. But even more so, roman architecture served the great Roman Empire, its expansion and the concepts associated with it. The main Roman buildings aimed at the glory of the Roman Empire but integrate public buildings. Aqueducts, forums, arenas, coliseums, public baths, villas and towns.

Get to know the roman empire architecture and its influences and goals.

the roman architecture and the great roman empire

In Classical Antiquity, Rome was a vast Empire with many territories, with a thirst of conquest that knew no boundaries. The Iberian Peninsula, Central Asia and North Africa were submitted to its supremacy.

Rome had been elevated to the rank of great power and considered a point of intersection of various conquered peoples and cultures, which the Romans knew well how to keep united. Consequently, their art resulted from the diverse cultures of the people they conquered and reached its peak between the 1st century BC and the 1st century AD, coincidentally almost in its entirety, under the rule of Caesar Augustus (adopted son of Julius Caesar). This was when the city was adorned with monuments and statuary that gave it the grandeur and pomp corresponding to the domain and power that the Romans exercised.

This empire had a profound influence throughout the Western civilization, in terms of language (Latin led to other Western languages), political and legal systems, and arts. During the rule of Caesar Augustus, peace and economic prosperity, provided by high achievements and a good government, allowed the Romans the enjoyment of free time. Public architecture was very important to the Romans. And as they prospered all over the Empire, the Romans constructed public baths, amphitheatres, theatres and circuses for the famous chariot races.

After Augustus' death, all emperors strove to surpass their predecessor with even more sumptuous buildings and urban projects, like the Nero’s Domus Aurea, the Trajan's Forum and Market, the Flavian Palace on the Palatine, the Villa Adriana in Tivoli, the Baths of Caracalla and Diocletian, the Arch of Septimius Severus and the Colosseum.

Although exercising a decisive influence on the conquered territories, they also drew much influence from them, in particular from the Greek, with the use of the three orders and the columns. Roman architecture became a result of the contact with this classical culture, through the conquest of their territories in name of the Empire and the import of the many spoils of war collected during times of war.

Romans preferred an ornamental exaggeration to the Greek aesthetic balance and were mainly influenced by their exteriors, adapting them to their constructive systems and materials. There is also an Etruscan heritage in the proportions and engineering expertise.

Despite its clear influence, Roman architecture stands out for its technical ingenuity and creativity, where grandeur remained (showing the power of the Empire and thus intimidating the greed of other nations), the usefulness and the duration of the construction. Their concern for urban design is remarkable, as well as the application of mortar and a strong use of the arch. These characteristics distinguish them from the Greeks and contribute to bringing dynamism to the buildings, becoming a trademark for Roman architecture.

Beautiful and utilitarian, the buildings were embellished with decorative elements and noble stones in an excessive taste for luxury, a reflection of power. It was filled with a triumphant and historical character, marking the military and political exploits of the Roman people. Reliefs decorated architectural structures, especially the triumphal arches and commemorative columns. The goal was a clear desire to advertise, to document and celebrate, perpetuating the memory of their ancestors, honouring and glorifying them.

Roman art, eclectic and sumptuous, was a reflection of a splendid Empire with centuries of conquests, based on a Greek and Etruscan past, but at the same time, innovative, due to the inherent ability of the Romans for art and engineering. Thanks to their visionary skills, some buildings still remain as an influential example in contemporary architecture and many Roman buildings even remain still in use, resisting Time, which erased the names of their craftsmen.

For centuries, Generals, Emperors, Popes and Princes left in Rome their personal mark. They engaged renowned architects, painters and sculptors that gave to the Italian capital its lovely appearance, which still persists as an inexhaustible mine of artistic treasures that attract and fascinate millions of visitors to the Eternal City.

join us in this adventure...

through the world of history, art and culture

how to prepare an oral history project

What are the most frequent themes in figurative painting?