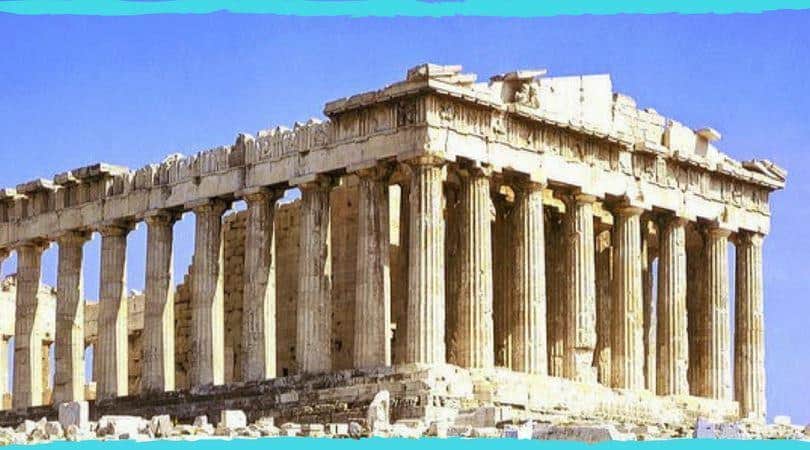 An unfinished building on the Acropolis of Athens, started around 520 BC, under the rule of Peisistratos and his

sons,Hippias and Hipparchus, was crushed by the Persian King Xerxes in the Persian wars in the 5th century BC. When the Persians finally withdrew in 480 BC, though defeated, they left the Acropolis completely destroyed. It remained like so for 33 years. It was necessary to await the arrival of Pericles to the government of the country and its reconstruction in 447 BC to begin the building of the Parthenon over its ruins, keeping several of its aspects.

The new temple was dedicated to Athena, the deity of the just war and protector of the city, which helped defeat the Persians, at a time when Athens was soaring with pride and confidence, using the treasure of allies for its construction (money originally destined to aid the war against the Persians).

Upon request of Pericles, the construction of the Parthenon started in 447 BC and took fifteen years (ten for its construction and five for the decoration), in which many workers participated under the project of Ictinus, the execution Callicrates, and supervision of the sculptor Phidias.

The final set is the largest Doric Temple of Greece, erected during the prime era of the city and representing the culmination of the style. It is the most recognised and perfect example of classic buildings and even today it enchants by its triumphant majesty at the summit of the town and by the perfection of its lines and harmony of its proportions. Its various mathematical calculations and architectural rules led it to the competition for one of the Wonders of the World.

Why there are no straight lines in the Parthenon?

In order for the temple to maintain a symmetrical and light appearance, straight lines weren’t the best. The Greeks resorted to the Entasis, which is a very light curve voluntarily made on the central part of the shafts of the columns. I.e., they slightly arched the lines, forming an inward inclination on the exterior columns. Nowadays, it is very difficult to confirm this practise visually because of the lack of parts of the building. Nonetheless, such a feat requires an extraordinary domain of mathematics and construction. The concern with detail and the mathematical calculations may never have been taken as seriously as with the Parthenon.

The pursuit of visual harmony and optical corrections leads to the work of Ionian Greek architect Ictinus, who proved to be a true master of perspective, as well as the detailed calculations that were developed in order to please the human eye from a lower point of view.

Based in a page of the online course:

Taj Mahal | The greatest proof of love in the world.