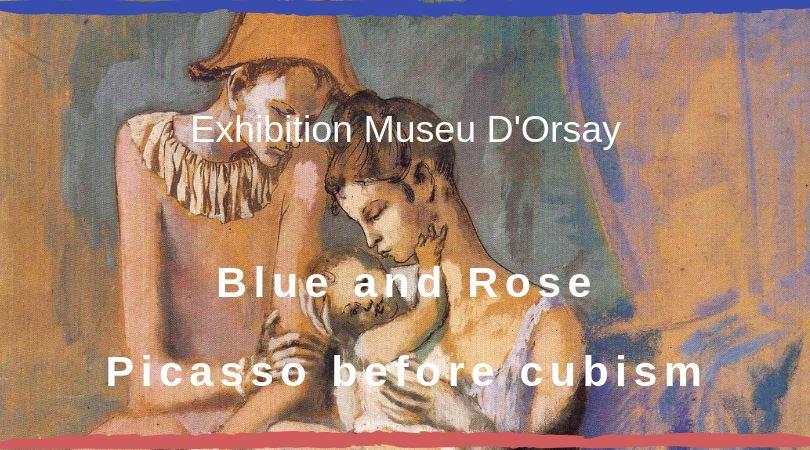 Pablo Picasso | The artistic path  in Rose and Blue periods

When we talk about Pablo Picasso we think in distorted forms, vibrant colours, pictures full of feelings overflowing.

However, the path of the artist until the cubism was long and full of trials. Two important periods of his production won this month a new look in Paris.

For the first time, France receives an exhibition that gathers canvas, drawings and other work on the blue and rose periods of Pablo Picasso.

The initiative is a partnership between the Musée D’Orsay – where it happens – and Picasso-Paris Museum. Until 6 January 2019, visitors can enjoy masterpieces of the period between the years of 1900 and 1906.

Picasso was already known in Parisian art scene. He had contact with various artists and their expressions.

Understanding the various currents of the time, such as Fauvism and modernism, he begins to distance even more of classical painting and initiates the creation of transgressors works, pictorial and bleak and, at the same time, homogeneous and harmonics.

Portraying the existential symbolism and melancholy in his most powerful expression,

Picasso delves into the absorption of his figures. They are ordinary people, with unrecognized professions, such as washers and prostitutes, or drunks, homeless, elderly and marginalized.

The scenes portray mothers holding their babies nestled in their lap, women at the table of a bar, couples with lost looks, decrepit people sitting on the floor with the body delivered to loneliness.

The focus is on the characters.  The background has few elements or none and the tones of blue are overlapped and creating textures that defy the perspective. 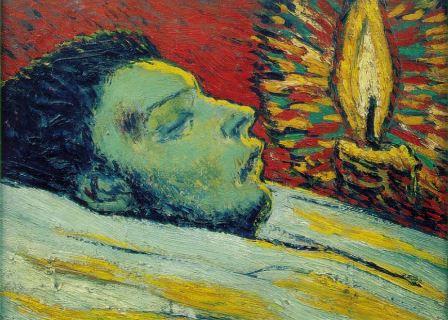 The Death of Casagemas – 1901 – the suicide of a friend stirred deeply with Picasso. 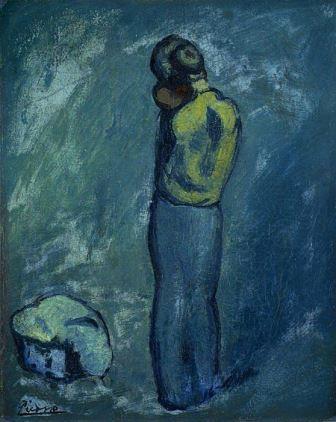 Mother and Son – 1902 – The shades of blue give grim appearance to the scene.

In  “La Vie”, 1903. The composition, according to experts, mixes several themes, with characters that do not interact or look, forming an unreal scene, almost threatening.  From the pregnant woman, passing by the infant, aging, and death, in the centre of the table. 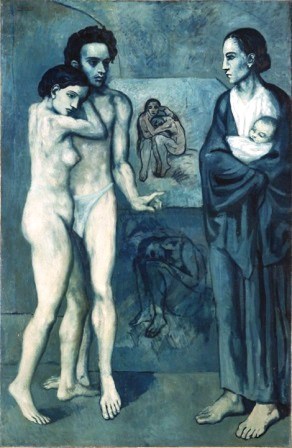 After a dip in the melancholy, Picasso began to expand its range of colours. We must note that the division between the two periods was something subsequent to the execution of the works by Picasso. The artist and his contemporaries did not this cut in the production of Pablo Picasso. On the contrary, saw it as continuity.

In the beginning of rose phase Picasso painted a series of portraits of Madeleine, Picasso’s girlfriend at the time.

Gradually, other tones are composing the works of the artist, in addition to the blue, as well as new themes. What persists in his production is melancholy.

One of the milestones of this period is the work ”Woman with a raven” of 1904. The composition is formed between contrasts and oppositions of shapes and colours, as the plumage of the bird versus the face of the woman. 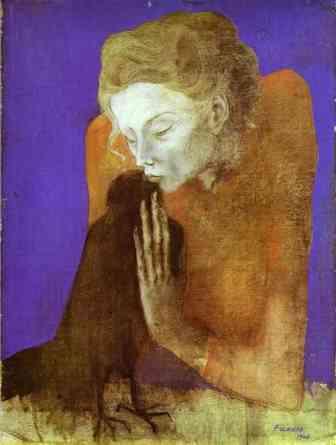 Picasso also started to paint the scenes of street performers and circus. There are several works from this period that show acrobats, harlequins, and their families in intimate moments. 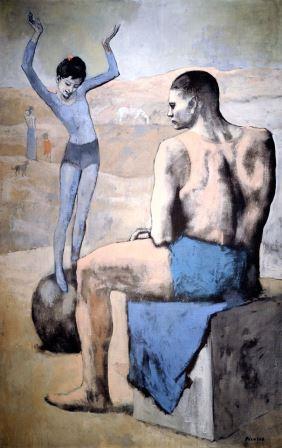 Acrobat on a ball – 1905 – The contrast between the blue and pink give movement to the body of the young acrobat that balances himself in front of other circus artist prior to the show. 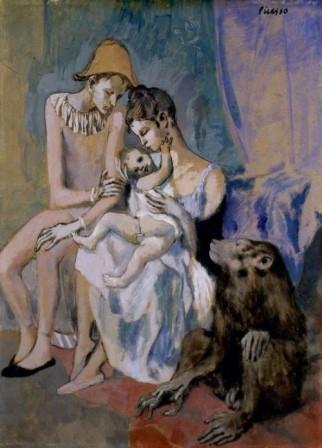 Family of acrobats – 1905 – scene of intimacy between artists, far from the stages, Picasso seems to be more interested in the particularities of life.

Nude on a red background – 1906 – The resemblance to Cubism is no coincidence.

Picasso also explored the shades of pink monochrome, and slowly, he began to focus on the female body.

New geometric shapes, space organizations and contortions culminated in one of his masterpieces Les Demoiselles d’Avignon, 1907. 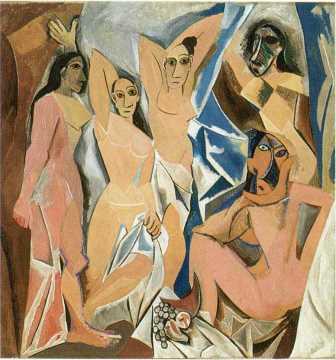 Iconography | How to identify the clergy robes ?