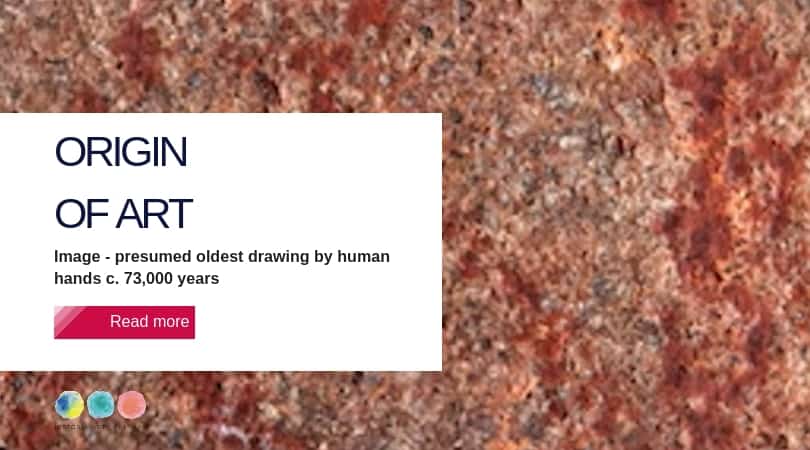 The origin of art is closely related to the very origin of humanity.

For a long time, researchers believed the oldest rock art in the world was at the Lascaux caves in France, dated from 35,000 years ago and discovered by accident. Recent scientific advances show that humanity, as well as art, emerged much longer and elsewhere.

Join us and find out the origin of art in this article by Manuela Tenreiro, author of the online course African Art.

Hundreds of thousands of years ago in the African continent, our remote ancestors used rocks and stones to paint (pictographs) and engrave (petroglyphs) a record of their history, daily life, the surrounding world and their spirituality. Since the 19th century, rock art has been essential to reconstruct the origins of humanity.

For a long time, researchers believed the oldest rock art in the world was at the Lascaux caves in France, dated from 35,000 years ago and discovered by accident. Similarly, they believed human evolution to be multiregional, meaning that migrations out of Africa occurred previously to the development of Homo Sapiens and that humanity therefore evolved separately in each continent.

But in the last decades, scientific advances in the areas of paleoanthropology, genetics and archaeology placed the origins of humanity and of art itself in Africa. They also revealed that humanity, like art, may be much older than previously thought.

Succinctly, until recently, scientific research stated that modern humans first appeared in the Great Rift Valley in east Africa, in today’s Kenya and Tanzania, about 200,000 years ago. A word of caution regarding these dates before proceeding: they are an average estimate, and they vary both ways in thousands of years, which is why we may find authors using 150,000 years ago for example. However, these dates are being constantly updated, and the discovery in 2017 of Homo Sapiens remains in a Moroccan cave by the Atlantic, dated from 300,000 years ago, has once again raised questions that require deeper investigations before we update our school books.

As for human migrations and the scattering of our most remote ancestors, firstly throughout the African continent and later out of Africa, we owe to genetics the consensus among scientists, the Single-origin hypothesis. This means that humanity descend directly from one small group of Homo Sapiens who ventured through the so-called “Gate of Tears” (Bab-el-Mandeb in Arabic), when the water level of the Red Sea was extremely low, facilitating the passage between today’s Eritrea and Yemen. From there, humanity spread around the world.

Inter-disciplinarity allowed for the reconstruction of ancient African history, thus ancient human history. For many dozens of thousands of years Homo Sapiens inhabited solely Africa where they developed the skills and abilities that characterize us today as human beings. They learnt how to use tools; they built societies, and they developed cognitive capacities that allowed for the material interaction, and the symbolic interpretation and expression that invented art.

Africa has hundreds of rock art traditions scattered around the entire continent. Traditions that were, and still are, practiced by hunter-gatherer and semi-sedentary groups composed of herders and farmers. And from what we learnt from the most recent archaeological discoveries, it all began in South Africa, about 70,000 and 100,000 years ago, in a cave facing the Indian Ocean, east of what many centuries later became the Cape of Good Hope.

Get to know the origin of art in the first artistic studio of humanity. READ POST

137
25,00€
JOIN US IN THIS ADVENTURE AROUND THE WORLD OF HISTORY | ART | CULTURE. Subscribe the newsletter

Do you think new scientific discoveries may reveal more about the the origin of art ?