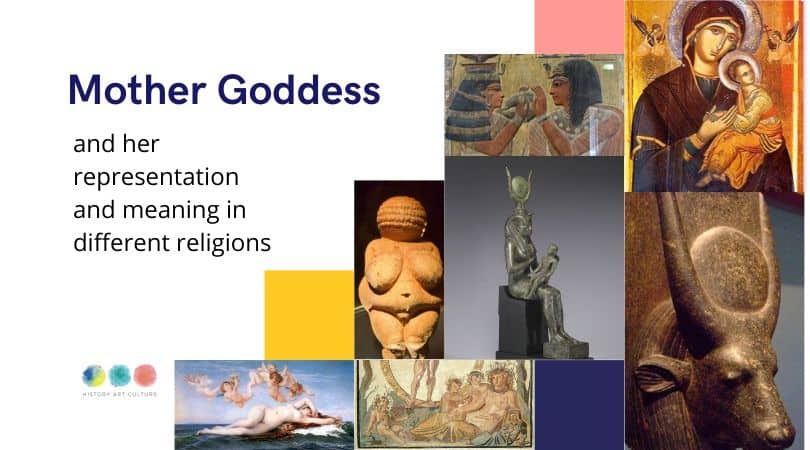 A reflection about the Mother Goddess - the primordial divinity since the dawn of Human History.

Yolanda collaborates with tCitaliarestauro.com in the areas of Art Analysis and Iconography. Several published works in the same areas.

In various religions the importance of a female deity is emphasized, seen as the supreme aspect that generates life, fertility, nature – the Mother Goddess.

Generally, an embodiment of the Earth, the Mother Goddess in pagan civilizations is the creator of the Universe, associated with multiple aspects of life, from creation and procreation, to nature and to working the earth, to family and the protection of children, but also to culture, language and communication.

The Mother Goddess in prehistory

The term Mother Goddess refers directly to a pagan religion created around the female deity.

A cult closely related to the very dawn of Human History, being reflected in the immense representations of Venus produced since the Paleolithic and Neolithic periods.

The very representation of Mother-Earth (often we find her mentioned as Gaia, referring to an original designation of Greek mythology) associates the female figure with fertility, in various mythologies, being even the mother of all other deities.

This reflects here the belief of the Earth as the creator of all living things.

The Mother Goddess in the  Greek pantheon

Veneration of the Mother Goddess continued for centuries, evolving and dividing even her attributes through various female representations of the same Pantheon.

Briefly analysing one of the best known pantheons of History, the Greek pantheon, we easily perceive that the attributes of the Mother Goddess (fertility, nature, health, education) are more or less distributed by the various main goddesses:

Demeter is associated with agriculture and the fertility of the soil, but also with fertility and the renewal of human life. She was also the one who created the principles of civilized life.

Hera is responsible for the protection of women: she is linked to all matters of women's life, such as marriage, childbirth and fertility.

Aphrodite also has the responsibility to ensure fertility and human procreation and the education of children.

Artemis, known to be the goddess of hunting, is the protector of wild nature, animals and their progeny.

She also has functions related to the female life, such as preparing for marriage.

Athena is the goddess of intelligence.

She protects housework, as well as war heroes, being guardian of homes, children and health.

Finally, Hestia is the protector of the Sacred Fire – the symbol of the connection with the motherland, which remained lit in all homes and that was lit wherever the political core of each new city would settle.

She is, par excellence, the goddess of cities, homes and families.

Get to know the online course Analysing Art

The Mother Goddess in Egyptian mythology

In Egyptian mythology, the Mother Goddess was depicted in the figure of Mut.

Her name, in Egyptian, translates into "mother" and she was one of the chief goddesses of Thebes, wife of Ammon and mother of Khonsu. Primordial goddess, associated with the waters from which everything is born (from which one of her titles derives:

"She who gives birth, but who was not born of anyone".

She was venerated as the great divine mother, represented with the body or only the head or wings of a vulture and holding an ankh and a feather of the goddess Maat.

Mut is believed to have resulted from the merger of two previous goddesses, Wadjet and Nekhbet, who when represented together represented the unification of the kingdoms of Egypt.

Mut inherited from the "Two Ladies" the crowns of Upper and Lower Egypt (red and white, respectively) and the shape of the white vulture of Nekhbet, protector of Upper Egypt.

Later, another deity associated with motherhood, Hathor, was pointed out, represented as a woman with a solar disk over her head, sided by the cow’s horns or even a cow with the solar disk between its horns.

Get to know the online course Iconography

The Mother Goddess in Christianity

This concept of the Mother Goddess can also be recognized in Christianity, in the figure of the Virgin Mary.

This concept of the Mother Goddess can also be recognized in Christianity, in the figure of the Virgin Mary. There are many faithful of the Christian religion (in the global sense) who project on the figure of Mary, a kind of "Spiritual Mother". Reflected in her various attributions (Our Lady of Conception, of Miracles, of the Afflicted, of Glory, of Hope, ...).

Mary assumes the role of divine Mother of Humanity, embraced as a Mother by the Apostles themselves (Jn 19: 26-27).

Some images of the Virgin Mary are thought to have been inspired by depictions of ancient goddesses, for example, the Egyptian goddess Isis, who often appeared depicted with her son Horus on her lap, in a position similar to that which we are used to see Mary with Jesus.

However, this figure which the early Christians nicknamed Theotokos ("Mother of God"), assuming the responsibility of being mother of all Christians, does not want to equate herself to a Mother Goddess.

She is neither a creative force nor a symbol of the feminine element; she has no responsibility for fertility or procreation.

She is, yes, the protective force that intercedes with the Creator (Holy Father); she is the one who supports, who inspires, who celebrates and who elevates.

It is with the creation of monotheistic religions that we see a more evidently the role of women in society assume a secondary position. Thus Mary is the Mother of God, but in the figure of the Son. The Holy Trinity supersedes her importance, making her an intermediary, an intercessor before the Father, the Creator of all things.

In short, throughout the world, the primordial deity has always been the Mother.

An initially feminine figure, generated from infinite nothingness, and which generated the Universe.

One cannot simplify her role only as a representation of fertility and procreation, because the Mother Goddess is the "Creator", more than the "Generator". She gave birth to Humanity and Nature, crafted the world of arts and civilization and protects and shapes her creation in the daily struggle for survival.

She represents the beginning and the end; she creates, preserves and destroys. And in the end, she receives what was destroyed to create once again.

Want to know the history and symbolism of the Kimono?