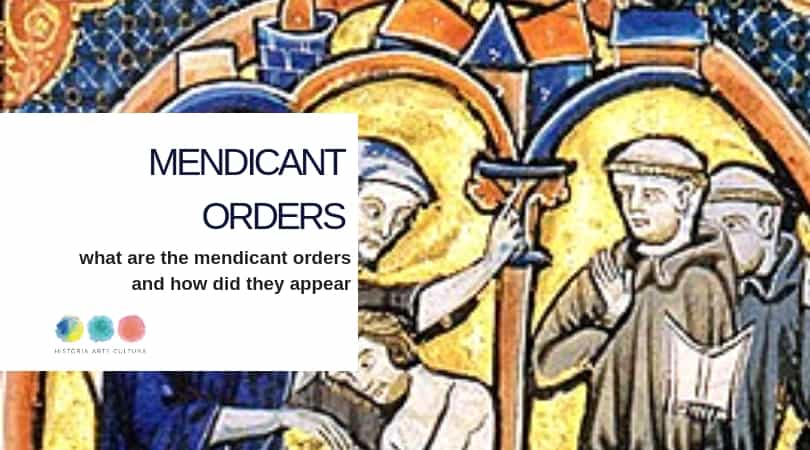 By the end of the eleventh century, new religious orders with an urban essence were formed. The mendicant orders  respond to believers' yearnings.

Author of the online course: Medieval City - Walled cities in the middle Ages

the growth of cities

About the year 1100 there are major changes in western Europe, especially the growth of cities. Cities create new agitation and religious issues, which in time unfold into new religious movements. Urban expansion generated prosperity, many individuals and institutions became rich, and the Catholic Church was no exception. Fortune bothered many believers who considered that the ultimate goal was to take care of the soul and not material goods. This call for spirituality only further highlighted the dissonance of the vow of poverty and the reality in practice.

At the same time, the development of universities and the access to knowledge inspired new ideas and the desire to challenge older beliefs. Some of the new beliefs were unsettling and some even heretics. All of this occurs in conjunction with a burst of religious enthusiasm caused by the Crusades. People wanted to take action to make a difference and solve the problems they were experiencing.

The monks would be expected to take on these movements, but the old monastic orders were not adequate to deal with the new urban problems. Monastic life was traditionally rural and did not enable the monks to confront the issues that arose in the city. In addition, the ancient monastic orders had also enriched, the monks gave up their possessions, but the monasteries benefited from the vast lands and other assets of the Catholic Church. Many people came to perceive the Church as a materialistic institution, and the monastic richness, besides contradicting the nature of their vows, proved these perceptions.

By the end of the eleventh century, new religious orders with an urban essence were formed to try to solve city problems. The members of these new orders longed to reproduce the life of the apostles, a simple life focused on preaching and faith. Not only did they give up their possessions, but they lived in an austere reality, they traveled through from city to city, sustaining themselves through donations, begging. That originated the term "Mendicant Orders" as they were designated.

One of the most famous orders was created by an Italian noble man known as St. Francis of Assisi. Franciscans helped the sick and the poor, and preached the faith in the gospel in the cities. Initially they had no properties and little organization, they followed some rules created by their founder St. Francis.

Another order was that of the Dominicans, founded by Domingos Gusmao, a severe Spanish who wished an order to combat heresy was more organized than most mendicants with many rules. Orthodox doctrines were studied by their monks in spaces offered by the order itself.

how did the mendicant orders lived?

The Franciscans and Dominicans intended to live on alms and not being bound to parishes or other religious activities, were free to preach the gospel through the streets, hear confessions, and be the Church outside the Church. Essentially, both orders were perceived as mimicking Christ. These policies generated a great popularity to the Mendicant Orders.

The population who perceived the Catholic Church as estranged from its issues needed reform. The desire for reform among the laity inspired other religious movements, such as the Cathars and Waldenses who were later considered heretical.

the recognition of mendicant orders by the pope

Dominicans and Franciscans would later find it difficult to maintain their ideals of radical poverty. The Mendicants were a problem to the papacy because they were uncontrollable, had little or no hierarchy or leadership, and were itinerant. Believing that recognition would bring greater control and obedience to the Church, Pope Innocent III officially recognizes the Franciscans and Dominicans as orders from the Catholic Church. After recognition the Franciscans became more organized.

Although all mendicant orders were prohibited, some were recognized until the late 13th century.

The Mendicant Orders were so popular that even being banned they kept multiplying. As these orders spread, they gradually became more radically critical of the richness and detachment of the Catholic Church. This movement played an essential role in weakening papal power. Due to this consequent weakening, the Church began to antagonize any heretical threat and began to take vigorous measures to prevent dissidence. Initially excommunicating and later further radicalized by the Inquisition, that used torture and other means to identify heretics. Eventually the Inquisition would find in the Dominicans a strong alliance, as wanderers they were everywhere and had the necessary knowledge due to training by their own order, were thus able to identify and refute heretical preaching

Do you want to receive updated information on themes of History, Art, Culture and Historical Heritage? SUBSCRIBE NEWSLETTER

the time of the pilgrimage ... “we are always in search and struggling”...

what is visual literacy in art ?