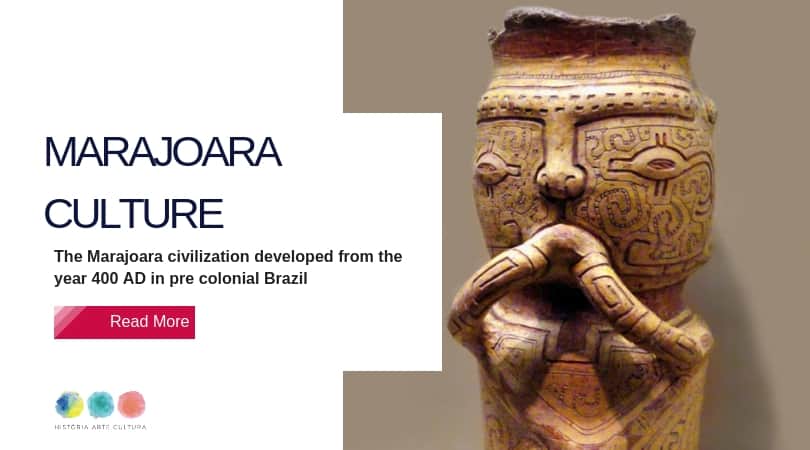 Get to know this civilization of pre colonial Brazil . Marajoara culture occupied part of the Brazilian territory that today corresponds to the Amazon. Marajoara civilization has reached a high level of complexity as witnessed by the archaeological remains found.

Why did it disappear long before the Portuguese arrived in Brazil? We only have speculation to answer this question. But we do know that the shapes and patterns found in the Marrajoara ceramics are today a source of inspiration for local artisans.

Because cultural heritage is also safeguarded by inspiration and artistic creation ...

Get to know this civilization of pre colonial Brazil in the post by Rute Ferreira.

What was the marajoara culture

You have probably heard of the Incas, Mayans, and Aztecs. These civilizations are called pre-Columbian, a division that includes everything that happened in the American continent from the Paleolithic until the Europeans arrived there in the 15th century. The Marajoara culture, which occupied part of the Brazilian territory that today corresponds to the Amazon, is also part of the pre-Columbian era.

Wait, have you never heard of these people?

Normal. When the Portuguese arrived in Brazil in 1500, they had already disappeared about two hundred years before. The Marajoara civilization developed from the year 400 AD, but there are indications of human activity in the region since the year 1000 BC. Other civilizations also occupied the territory that would be called Brazil from 1500, but of all, it is the Marajoara culture that reached a level of complexity that went beyond a simple set of people living together. However, studies of it only began in the 19th century.

The Marajoara was named after the present island of Marajó, where they lived reaching an approximate number of one hundred thousand people during the fourth phase of the occupation of the island. Some archaeological studies propose that this civilization began with a group originating in the Andes, while others maintain that it originated on the island itself.

In any case, the Marajoara culture developed in a very complex way. They were skilled especially in agriculture – after all, feeding 100,000 people hunting and fishing does not seem to be a task for amateurs…

Another interesting characteristic of the Marajoara people is that they created artificial hills, or used existing mountain formations, to build their houses and thus, to avoid any floods.

Marajoara art is composed mainly of ceramic artifacts, worked in a careful and extremely detailed manner. The first artifacts were discovered in 1871 and since then they have been seen as proof of the sophistication of the Marajoara culture.

Know some of this artifacts.

Their objects were both functional and decorative, and there is a bit of everything: pots, vases, funeral urns, toys and even little thongs, like the ones in the image below. Made of clay, the pieces were then decorated with drawings of snakes or other animals. There were also produced baskets of straw, jewelry, and tools.

A few funeral urns have also been found which helped scholars to see the funerary traditions of the Marajoara. A person’s flesh was removed from the bones and the remains were deposited inside the urn.

The Swiss researcher Emilio Goeldi is one of the main responsible for cataloging the ceramic works found in the Marajoara region.

marajoara culture | what is lost and what remains

Nowadays, the Marajoara culture is an inspiration for artisans who live in the region. Inspired by the graphics and the geometric motifs left by the ancestors, they manufacture pots, vessels and other ceramic objects, in a process almost all artisanal. In some villages, the community economy depends on this production.

You can see the importance of this handmade production of marajoara ceramics in the following video.

Nowadays, the Marajoara culture is an inspiration for artisans who live in the region. Inspired by the graphics and the geometric motifs left by the ancestors, they manufacture pots, vessels and other ceramic objects, in a process almost all artisanal. In some villages, the community economy depends on this production.

Unfortunately, many pieces were lost, both by the lack of care of some people who found them and by the passage of time. It is not known exactly how the Marajoara reached the end of their civilization. Studies suggest that they simply left the island around 1300, long before the arrival of the European settlers in 1500. But why? Speculations arise.

Do you want to receive updated information on themes of History, Art, Culture and Historical Heritage? - Subscribe newsletter

What do you think about the promotion of handicrafts as a way of preserving Marajoara culture and other lost cultures?

What are the most frequent themes in figurative painting?

origin of art | rock art and the origins of humanity