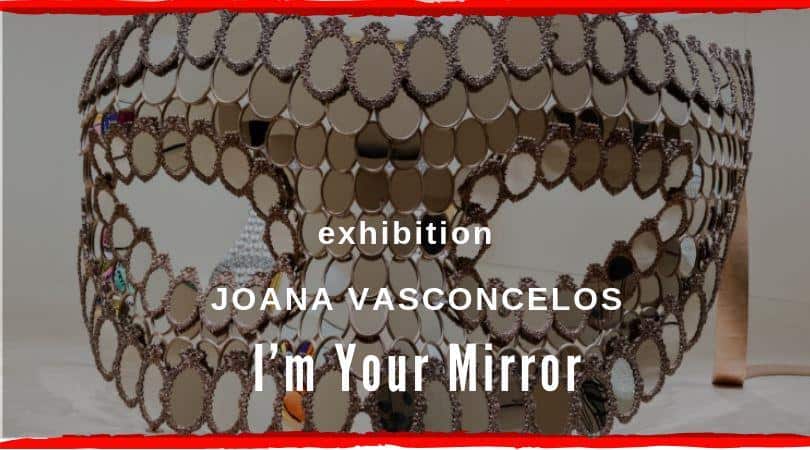 Joana Vasconcelos is one of the most outstanding contemporary Portuguese artists.

With a remarkable career of international exhibitions that beat records of visitors, Joana Vasconcelos stands out for the "decontextualization and subversion of pre-existing objects and realities of everyday life".

The exhibition I'm Your Mirror now at the Serralves Foundation, Porto, Portugal, was in 2018 at the Guggenheim Museum in Bilbao. It had a record number of 640 thousand visitors.

Get to know the path of the artist and her works.

Joana Vasconcelos was born in 1971. She lives and works in Lisbon. She has exhibited regularly since the mid-1990s. H

er work became known internationally after her participation in the 51st Venice Biennale in 2005, with the work A Noiva [The Bride] (2001-05). She was the first woman and the youngest artist to exhibit at the Palace of Versailles, in 2012. Recent highlights of her career include a solo exhibition at Guggenheim Museum Bilbao, the project Trafaria Praia, for the Pavilion of Portugal at the 55th Venice Biennale; the participation in the group exhibition The World Belongs to You at the Palazzo Grassi/François Pinault Foundation, Venice (2011); and her first retrospective, held at the Museu Coleção Berardo, Lisbon (2010). 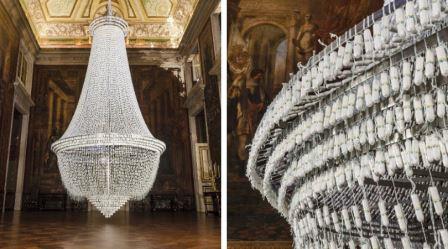 Recognizable from a distance, an imposing chandelier displays a candid cascade of glistening pendants. When stepping closer to it, the viewer is surprised. Appearing at first to be made of glass or crystal, the thousands of pendants are in fact immaculate feminine tampons. Its shine results, after all, from the reflection of light upon the transparent plastic wrappings of the thousands of tampons composing The Bride; a work thus titled in order to expose the imposition of a hypocritical and repressed feminine sexuality to the corrosive action of irony and ambiguity.

The nature of Joana Vasconcelos’s creative process is based on the appropriation, decontextualisation and subversion of pre-existent objects and everyday realities. Sculptures and installations, which are revealing of an acute sense of scale and mastery of colour, as well as the recourse to performances and video or photographic records, all combine in the materialization of concepts which challenge the pre-arranged routines of the quotidian. Starting out from ingenious operations of displacement, a reminiscence of the ready-made and the grammars of Nouveau Réalisme and pop, the artist offers us a complicit vision, but one which is at the same time critical of contemporary society and the several features which serve the enunciations of collective identity, especially those that concern the status of women, class distinction or national identity. From this process there derives a speech which is attentive to contemporary idiosyncrasies, where the dichotomies of hand-crafted/industrial, private/public, tradition/modernity and popular culture/erudite culture are imbued with affinities that are apt to renovate the usual fluxes of signification which are characteristic of contemporaneity.

This exhibition presents more than 30 works made from 1997 until now, covering two decades of art practice and assessing her whole development as an artist. It includes many of her best known works like Cama Valium [Valium Bed] (1998), A noiva, Burka (2002), Coração independente vermelho [Red independent heart] (2005), Marilyn (2011) and Lilicoptère (2012), as well as new works made for the occasion like Finisterra, I´ll Be Your Mirror or Solitário [Solitaire] (all 2018). The exhibition continues throughout the gardens of Serralves Park with the display of several monumental outdoor sculptures.

This exhibition has been organized by the Guggenheim Museum Bilbao, in partnership with the Serralves Museum of Contemporary Art and Kunsthall Rotterdam, and has been curated by the independent curator Enrique Juncosa. 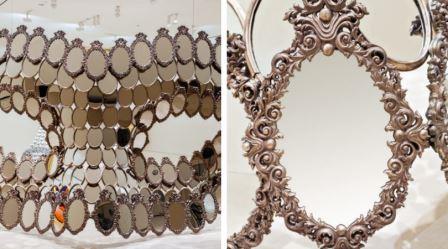 Joana Vasconcelos makes use of dozens of mirrors - with richly decorated frames, designed by the artist -, overlapping, like scales, to build a monumental and surprising Venetian mask. The public is invited to look through the Gulliver-like mask, from the inside or from the outside, but without ever losing sight of one's own image reflected over the many mirrors that form the mask. The title is taken from the homonymous song, written by Lou Reed and interpreted by the Velvet Underground & Nico, whose promise is to reflect, like a mirror, the true "self". We are also in the field of The Mirror, by Machado de Assis; or in the reflected image of the poem I Took Off the Mask and Looked in the Mirror, by Fernando Pessoa, one of the masters of the use of masks; or, in addition, in the field of Jung's analytical psychology, more concretely the process of individuation that drives each person to their individuality and totality, and the conciliation between the collective and personal unconsciousness brought to consciousness.

Who is Frida Kahlo | Exhibition of 241 photographs