The Gothic style arises from the Romanesque, after continuous technical and aesthetic improvements, in the middle of the Middle Ages. In the Île de France, near Paris, developing essentially between the thirteenth and fifteenth century in Western Europe.

The period was marked by the Black Death, which arrived in Europe through Genoese ships, and which killed one third of the European population from 1347 to 1451 (between 25 and 75 million people).

The precarious hygienic conditions of the cities facilitated the spread of the plague. It is said that in London were buried each day 200 bodies and, it is known that in Florence this catastrophe caused the death to 60 percent of its

This epidemic has altered daily life by sowing terror, paralyzing trade and production, lack of labor in the countryside, causing a wave of hunger and giving rise to monetary crises that have set the economic depression.

Hunger was combined with war, lack of hygienic conditions and quality of life, which were the causes of the high mortality rate that affected mainly newborns and children.

Fear of death was common to all, modifying medieval mentality and behavior. Insecurity and instability have led to popular revolts that have caused panic and violence. It provoked the exaggerated recourse to religion and faith to some, as the last hope, and to others, the discrediting and still the surrender to the pleasures, cultivating the idleness and vagrancy.

It also caused the abandonment of the sick people in the streets and the announcement of the end of the world.

Medieval architecture emerged in this environment, raising the faith of the population, in a threatening daily life.

The building considered as the purest expression of the Gothic style is the cathedral, symbol of the belief, of the city and of its own identity, constituting the pride and the religious enthusiasm of the inhabitants of the boroughs. These actively participated in its construction with their work or with donations that dragged along for generations. 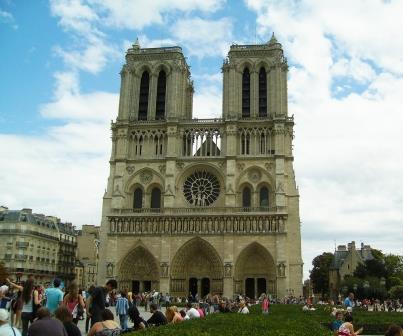 Main facade of Notre Dame, the most visited monument in Paris

The accentuated verticality of these “skyscrapers of God” (Le Corbusier) reflected the intense competition of the time between cities, disputed in the bold height of their towers.

The cathedral of Notre-Dame of Paris reached 30 meters of height, the one of Amiens 40 and Beauvais, not to be left behind, erected one of 50 meters. In this last one the desire to surpass rival cities was such that the building collapsed partially. 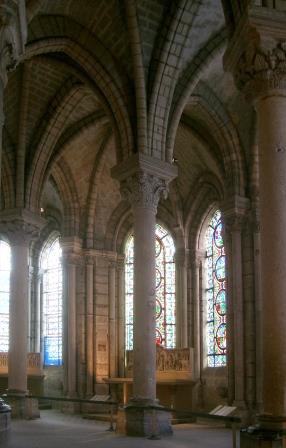 In Gothic, everything emphasizes verticality. Long, spender columns and elongated arches draw the eyes up to the soaring vaults. The vaults are higher, but the architecture is also designed to make you look up, and that emphasizes their height even more. By contrast, Romanesque’s wide arches and broad columns emphasize horizontal features.

The Industrial Revolution and the Iron Architecture 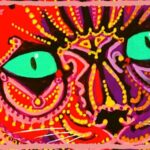