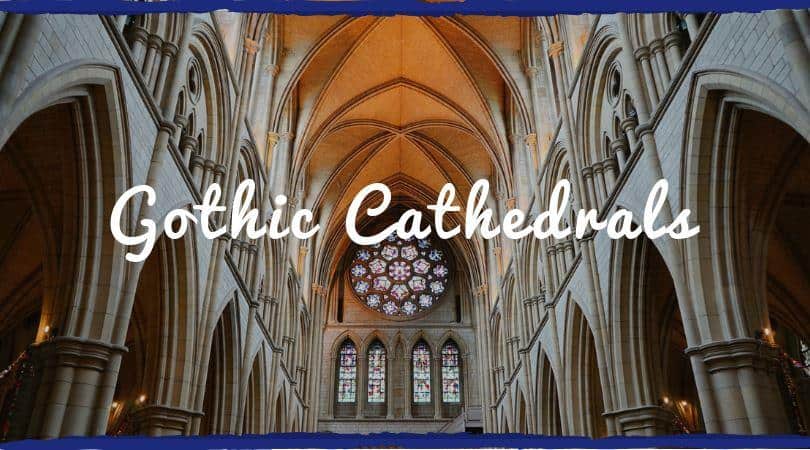 Gothic Cathedrals main attributes are the verticality, the lightness and the weightlessness. Gothic architecture seems to be light as a feather. The vaults almost appear to stay up by magic.

How was this possible?

To create all of these beautiful characteristics, Gothic architecture relied on three features: pointed arches, rib vaults, and flying buttresses. None of them were completely new innovations, but they had never before been regularly used together and developed to their full potential.

They opened up a world of new possibilities.

There are two main advantages to pointed arches, which look like regular arches with the top pinched up.

First of all, they don’t have to maintain perfect semicircular proportions like rounded arches do. Because of this, they can be very tall without having to be very wide. And, arches in a row can each be different widths but a uniform height. Secondly, pointed arches don’t send as much force outward (called “lateral thrust”) as rounded arches do.

This means that they’re less likely to collapse outward, and the columns or piers supporting them don’t have to be as thick.

Rib vaults are basically reinforced groin vaults. They have extra bands of stone along the diagonal ridges formed when two barrel vaults intersect to become a groin vault.

Rib vaults can be four-part (quadripartite) or six-part (sexpartite) based on the number of pieces they divide each bay (section of the vault) into.

Scholars disagree about whether they have a strong structural function or not, but there’s no question they contribute to the Gothic aesthetic. 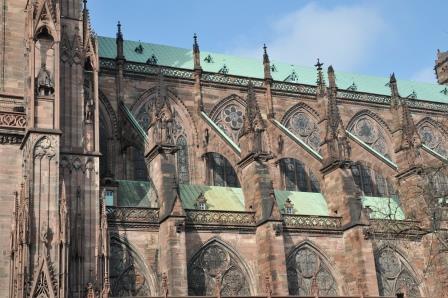 Buttresses are external supports that help to hold up a building.

The simplest buttresses are basically pillars with one side connected to the exterior wall. Flying buttresses have pillars several feet away from the exterior wall that connect to the building through arches. This makes them stronger and more useful  than simpler buttresses. They may have elaborate details, both decorative and functional.

Flying buttresses are the real heroes that make Gothic possible.

In the online course Gothic Architecture, students will learn to:

african rock art | when the Sahara was green