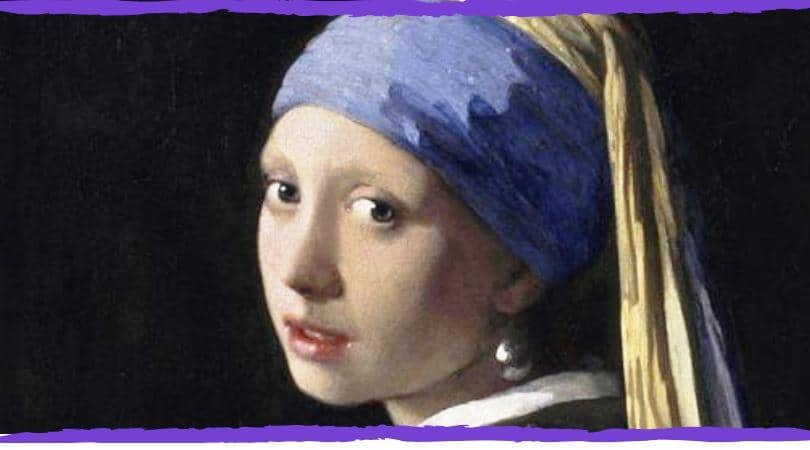 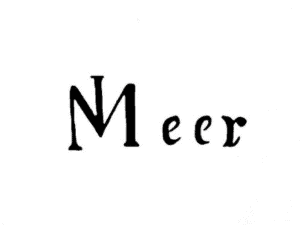 The work is signed, but not dated, believed to have been produced in 1665 in Delft, The Netherlands. Its dimensions are 44.5 cm high by 39 cm wide, relatively small compared to its international fame.

The girl with a pearl earring

The girl with a pearl earring is a striking painting. It portrays a scene in an indoor environment, a girl in exotic clothes on a dark background. The girl is wearing an extraordinarily large pearl earring and the material and colors of her robes appear to be precious.

The cut of the paint is located at the top of the torso, like a bust. She is positioned with her body turned away from the observer, while her face is turned over her shoulder looking directly at the observer, her eyes are of such spectacular size and clarity, her lips parted, reddish, express intimacy and sensuality.

The name of this work until the 50’s was Young girl or Turban Girl, only becoming later Girl with Pearl Earring.

Its composition is based on diagonal lines that generate a lateral movement centered on the axis of the girl, despite having asymmetrical lines there is a sense of balance and space compensation. Its contour is made by the contrast between the tones that the objects assume in relation to the light, dispensing lines. The light is diffused, but has clear orientation from the upper left to the right of the canvas, light is the central theme in the works of Vermeer. Having been called the "master of light". The brushstrokes almost devoid of texture, the soft colors, the lightness and softness applied to the object portrayed are typical of the artist.

The restoration of girl with a pearl earring

As we get closer to the painting we can see some cracks in the surface of the canvas, after the restoration made in 1994, it was impossible to repair the craquelures. On the occasion of the same restoration was removed yellowish varnish from the canvas, making the tones more alive.

Want to learn how to analyse a work of art?

Who was the girl with a pearl earring ?

In addition to the composition and light of the canvas, the girl's appearance and identity are much discussed themes.

Was she staring at the observer? Some say that the girl looks responding to a call, others think she was surprised. In contrast to these assumptions some say that the girl seems to be posing. Residing on this topic contradictory ideas about the positioning of the model.

Regarding the identity of the girl, a subject also very controversial, due to the absence of symbolic content, it can be concluded that it does not represent an allegory. Because it doesn’t portrays an environment, or identified person, it can’t be said that we are observing a portrait. But it is believed that it would be a tronie, a subcategory of portraits where the object portrayed is not a real person, but a figure imagined by the artist, idealized figures, or have exaggerated characteristics or expressions.

Pearls are usually depicted in the works of Vermeer, but none have a size as unique as this. It would be possible that the model was using a fake pearl made of glass, a technique commonly used in Italy to mimic the appearance of natural pearls in the seventeenth century. The lack of clarity in the representation of the pearl, it is basically a reflection of the environment floating on the girl's neck, is an argument in favor of this assumption. Although the possibility exists that the pearl is only the fruit of the imagination of Vermeer, that included it in benefit of the composition, representing the idealization, the technical rigor and the representation of wealth common in tronies.

Was she Vermeer's daughter?

It was common for Vermeer to use family members or close people as role models. There is a hypothesis that the model for a girl with a pearl earring was her older daughter Maria Vermeer, who was about 12 years old at the time the work was done, but many refute this thesis by the appeal of sensuality that open lips arouse. It is precisely in the absence of identity of the model of the painting that unfolds the novel that resulted the feature film Girl with pearl earring.

The painting is currently displayed at the Mauritshuis in The Hague.

Want to know artworks and artists that marked the art history?

how to analyse an artwork

Vermeer and the intense beauty of daily life