During the Ancient Monarchy, the Egyptians created the mastaba, the first type of funeral construction of Ancient Egypt. From this construction the Egypt Pyramids assume all kind of forms.

From the online course Treasurs of Architecture I  | Author: Diana Ferreira

It is a low building made out of brick or stone, with a rectangular plan, faces tilted inwards, each oriented to the four cardinal points, and a flat top. Its length varies between 4 to 5 meters and height between 3 to 9 metres.

The corpse was placed in an underground burial chamber with a few valuables, connected by a hallway – the serdab – which communicated with the outside and contained the funerary statue. The chapel was decorated with reliefs and mural paintings, and located at the ground level. It was the only place with access from the outside, where offerings were left and the dead worshipped. 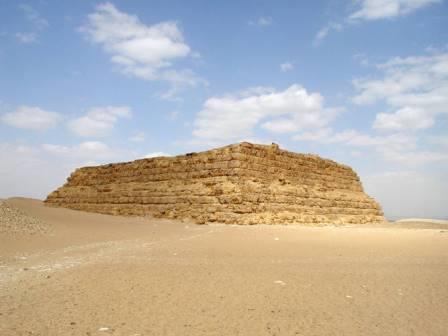 Throughout the ages they were modified, extended and the plan became more complex, but these three elements always remained: the chapel for worship, the room for the statue and the burial chamber for the deceased.

Since the 3rd dynasty, in order to show the high social statuses of the belated, grand tombs were built through successive overlapping of mastabas with gradually smaller dimensions, resulting in the step pyramid. Imhotep, the first architect whose name we know in the long history of architecture, was responsible for the pyramid that housed the tomb of Pharaoh Zozer, in Saqqara, erected about the year 2630 BC, having six floors and intended to represent a giant staircase through which the King would rise and meet the Sun-god. 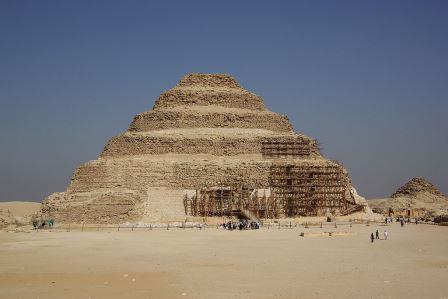 The rhomboid variant is a pyramid dedicated to Pharaoh Snofru, at Dahshur, and which at mid-height changes the slope of its edges, giving the impression that the upper half is crushing the bottom. 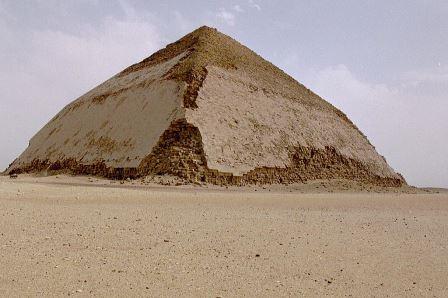 The evolution of the step pyramid originated the flat faced pyramid, during the reign of Sneferu.

In this type of funeral construction we can highlight the Great Pyramid of Giza, considered an architectural wonder of the Ancient World. It was composed of huge blocks of stone that weighed tons, carved and placed so precisely that it is often difficult to introduce among them a thin sheet of paper. Inside we usually find the same divisions of the mastabas, to which were added ventilation channels and other compartments whose functions remain unknown, complicated hallways (some of them with no way out), all this to make it difficult, or even impossible, to access to the tomb of the Pharaoh. For this reason the passages were blocked and the entrance disguised. 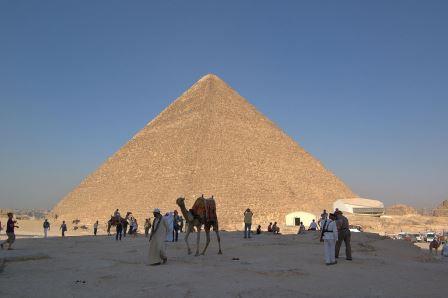 Despite its simple and geometric shapes that convey magnitude and are characterized by their durability, perpetuating the memory of the Pharaoh, its impenetrable appearance did not prevent the pyramids from being looted. The presence of treasures was too tempting despite stringent laws on tomb raiding. To put an end to these thefts, during the New Kingdom, the Kings of Thebes (successors to Thutmose I, with the exception of Akhenaten) order hypogeums to be built – underground tombs dug in the rocky cliffs of the Valley of the Kings, in Upper Egypt. These buildings, safe and discreet, were decorated in their interiors with high and bas-reliefs of colours with symbolic meanings, telling the deeds of those who were honoured there. The exterior also had coloured statues, but the exposure to sunlight ruined the pigments over the millennia. The same happened inside, when the tombs were robbed and then left open, deteriorating the paintings, which were successively corroded by the air and the natural elements. 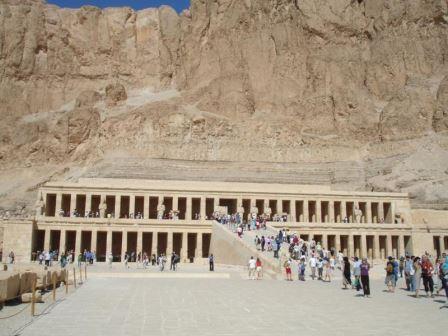 Online course TREASURES OF ARCHITECTURE | From Egypt to Byzantium

Haussmann | and the Paris we know...

Who is Frida Kahlo | Exhibition of 241 photographs