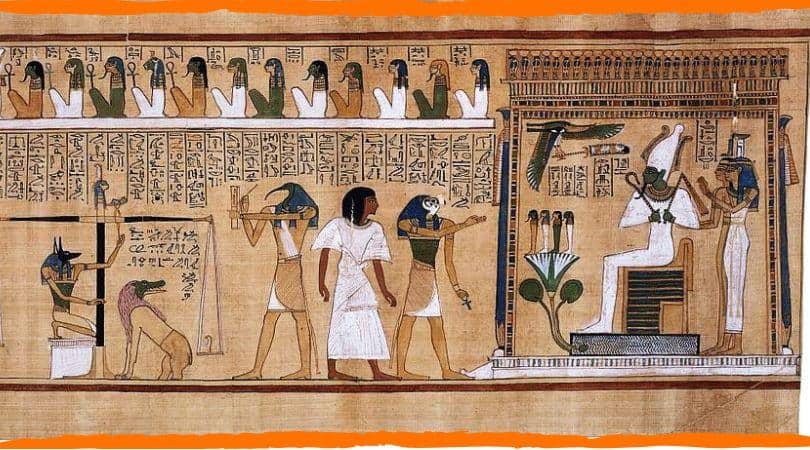 The religious beliefs of the Egyptians are reported on the walls of tombs and temples and on papyrus scrolls compiled in the form of the Book of the Dead.

The texts that integrate what is now called the Book of the Dead were not written by a single author nor are they all from the same historical period. The book of the dead is the compilation of the texts found in the papyri placed in the tombs next to the mummies.

We share in this article link to the English translation of these texts, from 1895, authored by Wallis Budge.

Religion was very important in the daily life of Ancient Egypt, as is visible in pyramids and temples. The religious beliefs of the Egyptians are reported on the walls of tombs and temples and on papyrus scrolls compiled in the form

of the Book of the Dead. They believed in various gods and even venerated forces of nature, such as the Nile River itself.

Religion was even present in the very structure of power of this ancient civilization. In addition to the existence of the extra-terrestrial gods, there was the Pharaoh, who carried within himself all the powers, assuming the role of priest and personification of god on earth.

The importance and status of the gods has evolved greatly over time. We can see, for example, that Narmer and his successors venerated Horus and Ra, being “sons of Ra,” who, once leaving the earthly plane, would accompany him on his daily journey. With Mentuhotep, in turn, the Egyptians came to believe that Pharaoh joined Osiris, the god of the Dead, a figure who became increasingly relevant in the Egyptian Pantheon.

The Judgment of the Soul

Thus, the Egyptian of Antiquity – rich or poor – came to believe in the Judgment of the Soul. The moment when, when he died, he was transported in a boat across the Nile to the kingdom of Osiris, somewhere on the west bank, where the sun sets each day.

There, the dead man was received by Anubis in a large judgment chamber, where he would be placed before 42 judges – each corresponding to a sin, having to convince them one by one that he had committed no sin. Then the dead would be brought before the tribunal of Osiris.

There, before Isis, Osiris, and Horus, his heart was weighed, using an ostrich feather as a counterweight (symbolizing the goddess of Truth, Maat). The balance would hang according to the truth or guilt contained in the heart of the dead. If he had not lived a righteous and virtuous life, he should suffer a terrible fate: to be devoured by Amut the Devourer.

In the figure below: Moment of Judgment before Osiris. This fragment is part of the Hunefer Papyrus, one of the best known versions of the Book of the Dead. He inherits his name from the scribe who wrote it, Hunefer, royal scribe of Seti I (XIX dynasty: between 1310 and 1275 BC, British Museum, London, England) .

Mural painting | what is it and what messages does it convey?